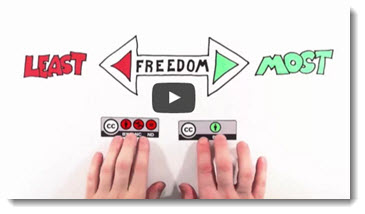 I was asked last week about: Creative Commons Licensing for using other people’s content (video, images, music, etc.) in our video projects.

The thing is… it can be VERY useful… but equally as confusing!

Fortunately, awhile back I created a nifty little Creative Commons (CC) “Primer” video to help at least lay the groundwork for you to wrap your head around it:

Now, the interesting thing is: I did NOT “create” this video! Since it had a CC license that allowed me to create a “derivative” work, that’s what I did!

Here are the steps I followed to modify it:

A good example of not only teaching a topic, but also leveraging Creative Commons all in one shot?

Let me know what you think! 😉

BTW, if you like this kind of content, it’s exactly the kinds of things we present every week on our Screencast Video Coaching Webinars.