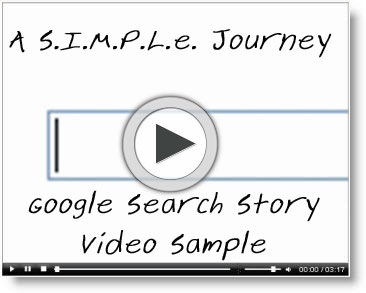 Like a lot of folks, I was intrigued by the rare ad run by Google during the Super Bowl. Some people loved it, some hated it, some indifferent. Certainly, if loud action shots, side splitting humor, or just good ole’ fashioned big boobs are what float your boat as far as commercials go then this was a departure!

In case you missed it, here it is again:

Me? I saw a brilliant video…almost a work of art. The combination of imagery, perfect music, and use of screen capture “scenes” put together into a 60 second collage was awesome.

But when it was over, I immediately thought, “Whoa! I could do THAT!”

Since I’m speaking at Bob “The Teacher” Jenkins S.I.M.P.L.E. Event this month, I put together my own little “search story”. Here it is: 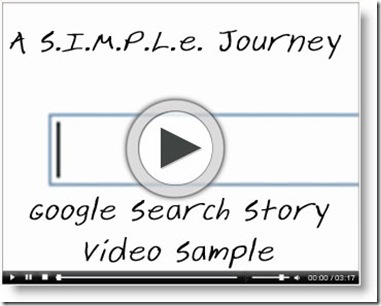 The really sweet part? I don’t have to pay $3 million bucks to air it! Actually, this clip is WAYYYY long because I couldn’t resist putting in the Cape Fear clip, so the 3 1/2 minute video would cost $10.5 million during that TV time slot.

The biggest concept to understand if you want to make one of these yourself is that it’s made up of individual “scenes” captured with Camtasia individually and then stitched together during editing.

If you tried to just grab ALL the footage in one recording shot? Hmmm…that would be VERY messy and you would never end up with anything that looked smooth. The biggest problem is that most of the scenes are “sped up” to give that cool fast typing effect.

I tried using Camtasia’s Clip Speed feature for this at first but since you can’t see the effects of the speed up until AFTER you produce, it was a TOTAL nightmare (come on Techsmith!! Uggg…).

I gave up and dropped the clips into Sony Vegas Movie Studio Platinum where the whole thing was a complete snap and I could monitor the timing and tweaks in real time.

Syncing the music, sounds, and other audio was also a breeze in Vegas.

I exported to a AVI file and did the Pan & Zooms in Camtasia (which is easier than Vegas to me), and rendered it out to MP4 Flash.

These kinds of videos aren’t new. They are called Search Stories and you can see other examples on this YouTube Channel.

A big thanks to Andy Jenkins (The Video Boss) for his blog post that gave me the inspiration and motivation to whip this out.

BTW…it took me about 7.5 hours, start to finish. Planning (as usual) took the biggest percentage of time (about 3.5 hours), setting up my “shots” and rehearsal about 2 hours, and the rest in editing and final production.

What do you think?

That was really cool!

I’m thinking I may have to save up for Sony Vegas now… I want to be able to do that too.

Does Camtasia have visual templates to add to our video somewhere?

Lon, you did a great job on that video… guess I’ll be saving up for Sony Vegas too… my son loves it, and creating videos. The time involved is always HUGE but the rewards of good planning and editing are what separates the men from the boys in video creation. 🙂

Thanks for your informative lessons and creative videos. You rock, too!